Starting XI: How should Liverpool line up against Sheffield United?

The Reds continued their march towards the capture of the Premier League title after an impressive performance saw off a Wolves side who have taken six points from Manchester City this season.

Chris Wilder’s Sheffield United have been a surprise package so far. The Blades have looked threatening and troubled Liverpool earlier in the season before Wijnaldum’s second-half strike secured a narrow 1-0 win at Bramall Lane.

Liverpool hold a 10 point lead and two games in hand over 2nd-placed Leicester City. Ahead of a tricky patch of upcoming games, Klopp won’t allow any room for complacency.

Takumi Minamino is ineligible for this one which means the new Japanese star will have to wait for his debut. 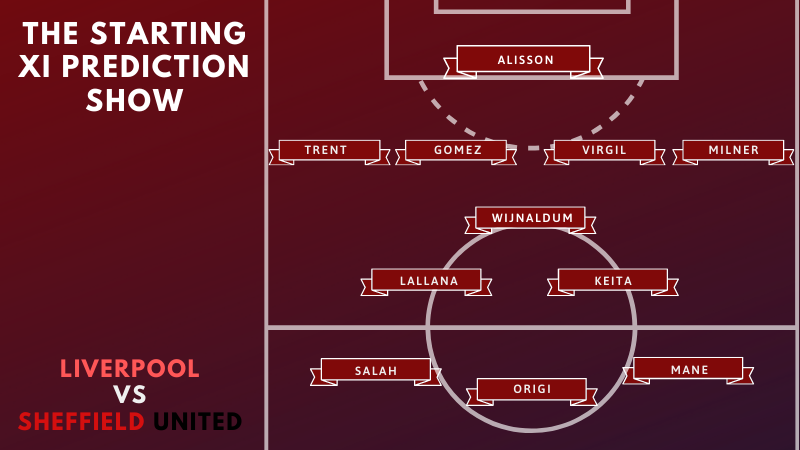 One change to the back four should see Milner come in for Robertson to allow Scotland’s captain a rest.

Henderson has worked tirelessly over the last few games which means Wijnaldum should start in the six. Naby is fresh to return alongside Lallana who was excellent against Wolves. The two should work well together, especially in helping the attack breakdown a stubborn Sheffield United defence.

Roberto Firmino looked tired towards the end of the last game when coming off which means we could see Divock Origi start the next two matches.

Injuries to Oxlade-Chamberlain and Shaqiri show how stretched the Reds are (and have been all season) – Klopp and the backroom staff have dealt well with the constant injury setbacks.

Mane and Salah should start but it would be unsurprising to see Harvey Elliott introduced early in the second-half.

The Blades are no pushovers but Anfield should be the difference. Liverpool win.

How does Chris think Klopp will line up Liverpool at Anfield? Check out his starting XI prediction show below!