Starting XI: How should Liverpool line up against Southampton?

It’s time to get back to winning ways. Two draws have left the Reds feeling frustrated while chasers Manchester United have claimed they are ‘joint top’ after some good fortune.

Despite dropping more points, the performance against Newcastle was much more promising. Liverpool created dangerous chances for Salah, forced saves from Karl Darlow, and on another day should win comfortably.

The most positive thing about the game was the return of Thiago. The Champions League winner showed why the Reds are a different side with him in the team; the balls to unlock defence which we saw from Henderson will be seen more often as Thiago joins the mix. 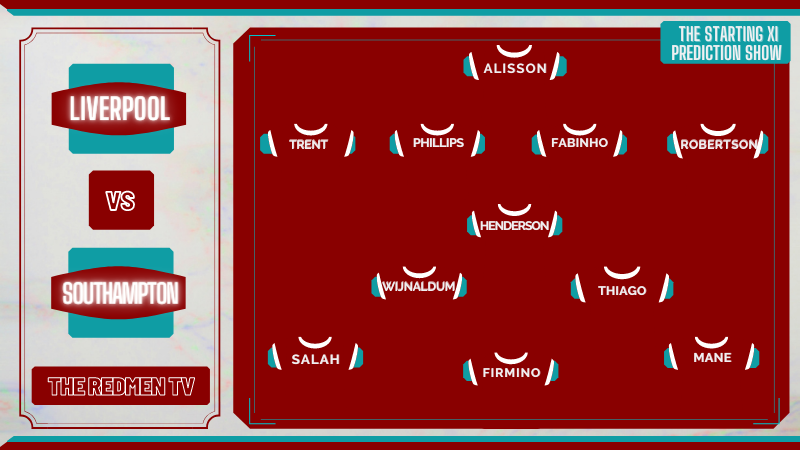 The only decision for Klopp to make is between Rhys Williams and Nat Phillips. Some were critical of Phillips in the Newcastle game, but the young defender played well aside from the one moment where he tried to take the ball from Callum Wilson and was beaten.

In midfield sees the return of the man we all want to see; Thiago. He joins Henderson and Wijnaldum in a midfield which could dominate any game domestically or in Europe.

Recent performances suggest the front three is yet to hit peak form. Salah is missing chances he would normally put away, while Sadio Mane can find another gear in terms of beating players and producing goals from nothing. Games against Spurs and United this month means Monday night’s game against Southampton is the perfect opportunity to begin a winning run.

Despite holding a good record at St. Mary’s, Ralph Hasenhüttl’s side are proving a tough test for any team in the Premier League. Klopp will be desperate for a response after back-to-back ducks and Thiago Alcantara could well be the difference in this one.