Premier League football returns with Liverpool facing Spurs on Thursday night. The Reds’ performance was much improved against United which saw goals finally return in the form of a Mo Salah brace.

Despite the defeat, it was more like Klopp’s side beat themselves; two calamitous mistakes and a contentious free-kick saw United profit – but Liverpool must take the positives from the trip to Old Trafford.

The front three must pick up where they left off to ensure a positive result against Spurs. Liverpool edged past Jose Mourinho’s side in December with a deflected goal and late corner; the North London side can’t be given the chance to make up for the missed opportunities at Anfield.

Both Joel Matip and Jordan Henderson are in contention to start in North London after training fully. 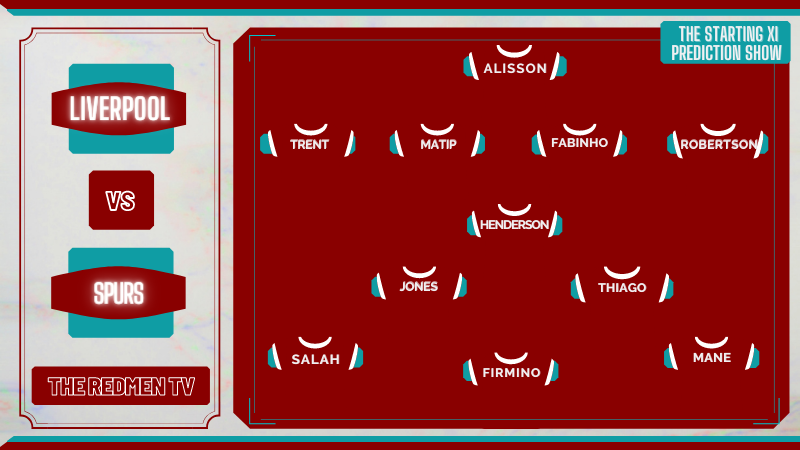 Matip must start if the Cameroonian defender is fit. Rhys Williams has been thrown into the deep end at times this season after performing strongly in the Champions League – but we can’t expect the consistency of Virgil van Dijk from a defender at such a young age.

The captain’s return means Thiago moves into a more advanced midfield position. I’ve gone for Curtis Jones here with a preference on natural flair necessary to spark the midfield into life. Xherdan Shaqiri could feature in the second half.

Sadio Mane returns. Roberto Firmino and Mo Salah will have no problems producing if they can find a repeat performance. One win is all it takes for Liverpool to find their feet again –  three points against Jose Mourinho would be the perfect way to get the season back on track.

How does Paul think Liverpool will line up? Check our the Starting XI show below!