Starting XI: How should Liverpool line up against West Ham?

An authentic Liverpool display saw the Reds rediscover form in a rampant win against Spurs. Klopp’s side reminded rivals that the title race isn’t over. The defending champions head to West Ham on Sunday as they look to secure six points from back-to-back away games in the capital.

Trent Alexander-Arnold’s performance reassured fans that class is permanent with a display resonant of the Boxing Day performance against Leicester City last season. Sadio Mane also looked on fire, but that was consistent with the entire XI on Thursday night – Liverpool’s front three appear to have reignited at the same time.

Jurgen Klopp confirmed Liverpool are looking to bring in a centre-back after Joel Matip suffered ligament damage in the first half against Tottenham. It’s a case of ‘one step forwards, two steps back’ for Joel at the moment; the Cameroonian is excellent when he plays, but injury problems continue to disrupt his career at Anfield.

The Liverpool boss also ruled out Fabinho for Sunday’s trip to West Ham. 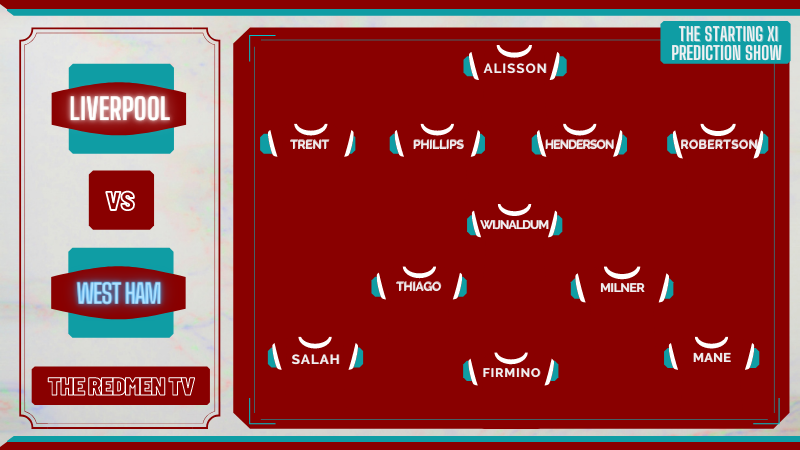 Nat Phillips starts alongside Henderson with this partnership holding-out before the Reds make a move in the transfer market. The young defender was faultless against Mourinho’s side and will benefit from playing alongside the skipper. No changes at fullback.

The midfield clicked well on Thursday and it would be foolish to change after one of the best displays of the season. Wijnaldum worked much better in the six. Thiago is more threatening from advanced positions while James Milner’s leadership could prove vital as we continue our return to form.

Panic over. Liverpool’s front three have finished their bad spell. Sadio Mane stood out for me on Thursday as the Senegalese winger seemed to get everything right from timing passes and runs to challenging defenders. Firmino and Salah also keep their places after an impressive all-round display.

West Ham will provide a similar test to the pragmatic Spurs by setting up to make themselves difficult to beat, but the Hammers won’t be as confident after seeing how Mourinho’s strategy was put into checkmate by Jurgen Klopp. Liverpool should take control of the game early and take all three points in this one.