Starting XI: How should Liverpool line up against Wolves?

The Reds went to the King Power Stadium and performed like world champions. Recalling such ease in a game of 1st vs 2nd  is difficult, but Liverpool dispatched Leicester with a performance which you would associate with the greatest sides of all time.

Wolves are up next who will have one day of rest between their game against Manchester City and trip to Anfield. If all results go the Reds way, Liverpool will be 17 points ahead of Pep Guardiola’s side by the new year.

Klopp must consider changes for this game amid a congested fixture list, but there is little room for manoeuvre in the Reds defence. Managing both fullbacks will be the biggest issue for the rest of the season if Michael Edwards hasn’t identified a January target. 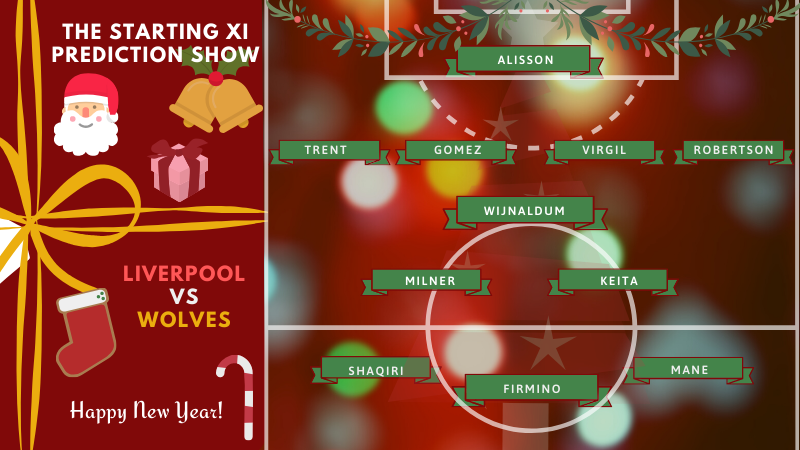 Adama Traore’s pace is a concern which may see Milner used in midfield rather than left-back. Klopp should keep the defence the same if all are fit – Wolves have less preparation for this one which should mean a less intense game.

The captain has worked tirelessly over the past few games, he can rest for this one with Wijnaldum back fit. Gini should start from the six with Milner and the in-form Keita ahead of the Dutchman. Naby’s performance against Leicester showed he is beginning to find his best form in a Liverpool shirt.

Four goals in three means Firmino is too hot to drop. Klopp must now begin to rest the front three; Shaqiri can come in for Salah on the right for this one while Mane’s rest can come against Sheffield United.

Wolves are a side who can beat anyone as they’ve shown since returning to the Premier League and in the Europa League this season. With just one days rest before coming to Anfield, it’s unlikely they will be able to perform to their best, and they are unable to match the depth of the Liverpool squad.

The Reds have performed strongly against Wolves in recent games and should be able to get the three points on Sunday.