Starting XI: How should Liverpool line up for the Champions League final?

Article by Adam Brown @AdamMNVi  One year later and Liverpool are in another Champions League final. It’s an opportunity to put right the disappointment of Kiev and a chance to complete one of the club’s most memorable journeys through the competition.  The return of Europe’s most prestigious trophy to Anfield would be a fitting end to the wonders which Klopp has worked this season. Standing in the Reds’ way are Spurs, not quite the competition of Real Madrid last season, but a team who have proven their caliber in earlier rounds against Manchester City and Ajax.

Here’s how I think we should line up against Spurs: 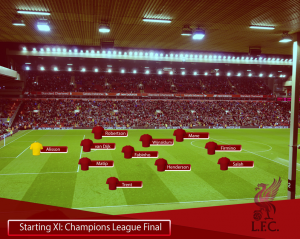 Alisson starts in goal behind our most consistent back five this season. People almost forgot this year how good Joel Matip was when he first arrived to Liverpool, the Cameroonian has delivered when called upon every time. Fabinho’s performance against Barcelona at Anfield shows why the former Monaco man is going to be a vital part of the Liverpool spine for years to come. There isn’t a better defensive midfielder than him in world football. With Gini playing from the left side, this opens up the vital question for Klopp’s team selection this weekend; Henderson or Milner? The captain has been excellent from his more advanced role in recent weeks, it’s too hard to drop him. Milner could still play a big role in this game in the later stages, he will be the first midfielder we look to bring on – especially if we can get the lead. Upfront sees Roberto Firmino return from injury. Mane and Salah will support from the wings while Divock Origi will be waiting for his introduction if needed. We can’t underestimate Spurs. Their performances in previous rounds have shown they’re more than capable of upsetting us. Liverpool will be the favourites this time; we have to play without fear and most importantly, be clinical. The result against Barcelona doesn’t guarantee us the trophy – and Spurs will punish us if we don’t take our chances. In both Premier League games this season, the Reds have been the better team in terms of chances created and expected goals (xG) – start strong and take a comfortable lead into half-time. Let’s bring number six home. Score prediction: Liverpool 3 – 0 Spurs  Article by @AdamMNVi – Adam Brown  How does Chris think that Jurgen Klopp will select the side? Check out the Starting XI Prediction Show below.    Article by Adam Brown – @AdamMNVi
Spread the love
Supporter's Section