What Has Been and What Will Be

I keep trying to enjoy international breaks. I do.

It probably doesn’t help that my national team, which in all fairness was the gateway drug that turned me into a football addict, is an absolute shit-show at the moment. If you think Twitter melts down when the Reds struggle a bit, tune into U.S. soccer Twitter when the men’s national team makes eye contact with one another. These boys can’t have a shower without a FIFA world star explaining why they don’t have the skill to use a loofah sponge properly.

It’s about as enjoyable as Liverpool was in 2010, except there is no Kenny Dalglish type figure to turn as a saviour, to steer the team toward decency. No figure to unite the warring factions of fans behind and make them set politics and ideology aside for another day, at least not yet.

But that’s honestly not why I’ve failed to enjoy international breaks of late. I can wrap my head around the ebbs and flows of team building, of talent development and the generational nature of national team rosters. I’m fine with the U.S. struggling for a while because I’m fine with a team getting stuck into the muck of it, fine with the organisation looking to the future with a patient eye the way the Reds once did and if I’m honest, I just can’t be bothered with international football the way I once was.

No, the sole reason I’ve not enjoyed international breaks is the absence of this Reds side to appreciate. Entire weeks gone by without this testament to what football can be, all in the name of countries fiddling about in meaningless exercises. We’re left longing for the pure joy of watching this group figure things out in real time, the way they problem solve and pull moments of class from thin air as if each game was a 90-minute-long magic trick. I could watch it from sun up to sun down and never get sick of it.

What a weekend that was to walk into this international break with. For a couple weeks you can look at that table and that eight-point gap and simply appreciate the ways these Reds have started the season.

If you’re not doing that, have a moment and think back. Think back to the times we started slow and you knew by the end of September Liverpool were never going to challenge for anything but fourth at best.

Think back to the uncertainty of recent years, that sense of panic that we hadn’t won anything in so long and would we ever win anything again? But then we did. We lifted that big eared bastard, and now we’re on a march toward that elusive prize we all want. 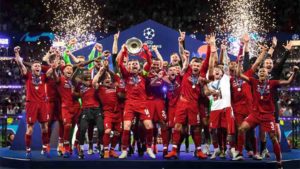 But we’ve been here before, haven’t we? We’ve seen the sky at the end of the storm, we’ve just never been fortunate enough to walk into the sunshine. Naturally, we’ve gathered a few scars over the years as a result.

And so inevitably, if you stare at the table for too long, one of your mates will remind you that we were seven clear at one point last season. Remind you that we’ve coughed up these opportunities before, and with fewer matches to play. But every time someone berates me with this, I can’t help but wonder at what point they do enjoy it. If not in October, when?

When it’s over? That’s like enjoying a meal only once your plate is empty or enjoying sex as you put your clothes back on. This is the part you long for all summer, the part Klopp keeps telling us all to relish; the journey.

The tension will not get any lighter as we move through the season. There won’t be less on the line, only more. If you’re melting down over Dejan Lovren playing football now, I worry about you if he has to play it again at the Etihad in April.

At the very least, hold your concern until after he puts on another display like that one against Spurs the season before last, rather than before he puts on a cool-headed performance like he did on Saturday. The kind of performance that saw him compete in a Champions League Final and World Cup final in quick session just a little more than a year ago.

If your head’s going to go, at least wait until you take your Christmas decorations down. At this point, you’ve not even got your Halloween costume sorted. If you ask me, you’re better off figuring out how to paint a bit of ab on your flab for that thirst photo Mo Salah costume you’re trying to pull off rather than worrying about whether Klopp has too much faith in Adam Lallana. 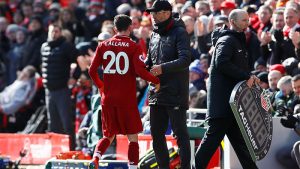 Just as those who count chickens before they hatch should step back and look around for some perspective, so should the crowd that’s already tormenting themselves over the prospect of dropped points before a single one has slipped through this team’s fingers.

Moderation, dear Reds. In all things. Enjoy this for what it is today, not for what it will be, and in the same breath, don’t be tormented by what it hasn’t been.

When these two weeks are up, the Reds will make the trip to Old Trafford, a ground that hasn’t been kind to us. One that is occupied by an arch rival desperate to have something to feel good about. A win for them would be massive and quite possibly the type of result that sends us into a poor vein of form during one of the toughest runs of the season. I don’t think it’ll go that way, because I think these Reds are stronger than that. But weirder things have happened.

I can sit and think of days our roles were reversed and how we got one over on them in our bleakest of times. I can sit and think about what this next result will mean for our season one way or the other. All the things that have been and will be. But why? The only thing I need to do today is relish the site of that table. Eight played, eight wins, none drawn and none lost. Eight points clear.

If this were a fireworks show, we’ve kicked it off by launching the space shuttle. Strap in, wherever we go from here is going to be one hell of a ride.

In the meantime, do what you must to enjoy this international break. Personally, I’m trying to think of it as a bit of forced moderation.